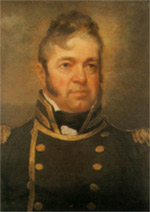 Commodore William Bainbridge, USN, ranks among the early heroes of the

United States Navy. Born in Princeton, New Jersey, on May 7, 1774, Bainbridge began his sea-going career at 14 in the merchant service and became captain of his own ship within 6 years.

Bainbridge joined the naval service in 1798 as a lieutenant, becoming part of a group of young officers known as “Preble’s Boys.” Under the leadership of Commodore Edward Preble, these young patriots dared to challenge the French, the Barbary Pirates and even the world’s most formidable naval force, the British Royal Navy, in the defense of their young nation. As captain of the schooner RETALIATION, his first naval command, Bainbridge was forced to surrender to a superior French force but successfully negotiated his own release and the release of more than 300 other captive Americans in exchange for fewer than 100 French prisoners.

Subsequently promoted to Master Commandant and on to Captain in 1800, Bainbridge’s next duty station was the Mediterranean, where the United States was engaged in a continuing conflict with the Barbary Pirates. A squadron was deployed in 1803 under Commodore Preble, and Bainbridge, who was not yet 30, was given command of the 36-gun frigate PHILADELPHIA, the era’s equivalent to a battleship. With orders to “subdue, seize, and make prizes of all vessels, goods, and effects belonging to the Bashaw of Tripoli or to his subjects,” Preble’s Boys joined the fray. While pursuing a zebec, a
small warship, the PHILADELPHIA ran aground just outside the harbor of Tripoli. Surrounded by a number of smaller and more maneuverable ships, Bainbridge surrendered rather than risking the 307 lives of his crew. The PHILADELPHIA was re-floated by the pirates, but was blown-up in February 1804 during a daring raid led by Lieutenant Stephen Decatur. Bainbridge helped plan this daring maneuver through the use of ciphered messages sent while imprisoned.

Bainbridge’s greatest achievement was his victory over HMS JAVA on December 29, 1812, off the coast of Brazil while captain of USS CONSTITUTION. Old Ironsides, the ship’s enduring nickname, is the oldest commissioned U.S. Navy warship. Berthed in Boston, Old Ironsides continues to carry a replica of HMS JAVA’s wheel, which was removed from the hulk following the battle and used as a replacement to Constitution’s own destroyed wheel. During the battle, Bainbridge led his sailors to victory despite being twice wounded. Excerpts of Bainbridge’s own harrowing account of the battle are presented on the facing page.

Commodore Bainbridge later commanded the Naval forces of Boston where he supervised the construction of USS INDEPENDENCE, the United States’ first ship of the line, the era’s equivalent to an aircraft carrier. In 1820, he returned to the Mediterranean as a squadron commander aboard USS INDEPENDENCE. Upon his return, he was Commandant of the Boston Navy Yard, Naval Commissioner between 1825 and 1828 and Commandant of the Philadelphia Navy Yard. Bainbridge was posted back to Boston for what became his final tour of duty. He died in Philadelphia on June 27, 1833, after ill health forced him to leave naval service.

15 minutes past meridian (12:15)—the ship hoisted her colours, an English ensign

1:50 PM : the enemy bore down with the intention of raking us…

2:00 : the enemy being within half a mile of us, … Considerable manouvres were made by both vessels to rake and avoid being raked

2:10 : commenced the action within good grape and canister distance… 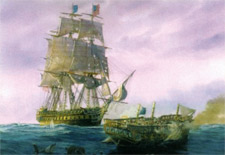 4:05 : having silenced the fire of the enemy completely, and his colours in main rigging being down, … leaving the enemy a complete wreck…

5:25 : got very close to the enemy. . . when he most prudently struck his flag,… as he laid an unmanageable wreck upon the water.

…sent lieutenant Parker, 1st of the CONSTITUTION, to take possession of the enemy, which proved to be his Britannic majesty’s frigate JAVA, rated 38 but carried 49 guns, and manned with upwards of 400 men, commanded by captain Lambert, a very distinguished officer, who was mortally wounded. The action continued from the commencement to the end of the fire, one hour and fifty-five minutes. The CONSTITUTION had 9 killed and 25 wounded. The enemy had 60 killed and 101 certainly wounded…

The JAVA was an important ship, fitted out in the completest manner, to carry lieutenant general Hyslop and staff to Bombay, and several naval officers for different ships in the East Indies, and had despatches for St. Helena, Cape of Good Hope, and every British establishment in the India and China seas. She had on board copper for a 74 and two brigs building at Bombay, and I expect a great many other valuables; but every thing was blown up in her except the officers’ baggage, when we set her on fire at 3 PM on the 1st of January, 1813, nautical time.

There are no events at this time.